Background
This is a really interesting question to consider at this point in my teaching career. I actually started teaching for the first time in 1972 when I was at university finishing a Master’s degree in music. We could register as substitute teachers and would be called when needed to cover classes when someone was ill. It was an experience that taught me flexibility and survival techniques in the classroom. At the same time I was finishing up a certification in music education and the combination of reality versus theory was enlightening. I then spent two full years teaching what we now call ‘at-risk’ students in a school in the one of the poorest areas of the city. The lesson I learned then was ‘it was often more important how we taught than what we taught’, something I have kept in mind all these years.

a day out with the school kids at the park

a school performance of ‘Rubber Ducky’

Starting off in Austria
When I arrived in Austria in 1981 I began auditioning for opera houses but needed a ‘day job’ and started off with two types of jobs. One was tutoring children which helped me to learn the names used by German speakers for English grammar points (such as tenses) and the other was at an adult education center where I quickly discovered that I enjoyed working with grown-ups to help them learn the language. I think my advice to myself would be that one of the most important things to understand is how German-speakers think and how they make sense of concepts in English. I found that my learners often were able to memorize rules and recite them but as the concepts of tenses are different, I needed to better understand where these problems lay. A few years after beginning to teach, I did a diploma in Adult Education which gave me theoretical background which I was able to implement in my practical sessions.

Moving into teacher training
This started fairly early in my teaching career. I often took the opportunity to to take part in professional development and began discovering new and exciting methods from people such as Jim Wingate, Charles Schmid, Simon Greenall, Sheelagh Dellar, Michael Grinder and Eric Jensen on topics including suggestopedia, NLP in the classroom, communicative activities, cooperative learning and brain-based learning. These courses encouraged me to work as a facilitator and offer to teach other teachers what I had learned. I went to the UK and the US four times in  summer and I think my advice here would be to have continued spending time in the summers taking intensive training courses.

Conferences
My first presentation was in 1994 and I but I think I attended one or two conferences before working up the courage to present myself. Since then I have been at over 70 conferences and spoken on a variety of topics ranging from using texts to activities in the Business English classroom as well as NLP and writing activities for Business English learners. Advice I could have used then would have been to go to as many presentations as possible and keep a journal on what made presentations work and what didn’t. This would have been a fascinating piece of work to refer to today. 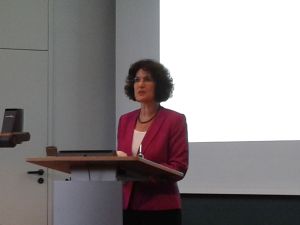 giving a plenary at the ELTAF conference in Wiesbaden, Germany in 2014

Teaching Associations
When I first heard about TEA (Teachers of English in Austria) in the early 1990s I realized that joining an association would be a great way to start connecting to other English teachers. I slowly became more active and eventually joined the board and was Chair from 2001-2003. After standing down from this position I realized I missed working on a committee and ran for the position of Events Coordinator of IATEFL BESIG in 2008 and for Coordinator in 2009. This has become a major part of my life and after joining the membership committee of IATEFL in 2013 I was encouraged to stand for Vice President which I did and am now the Acting VP of IATEFL. Looking back, it would have been great to start being active in a teaching association even earlier in my career.

Writing
Writing has been a big part of my life since I first published a book in 2001 with photocopiable activities for business English. Since then I have written other books in the business English field as well as course books, workbooks, CD ROM activities and a methodology book. I am just now looking into ePublishing and am still exploring the possibilities of this as well as self-publishing. I suppose I could have tried this earlier and taken the chance to publish without a publisher behind me but that is still an area in which I have much to discover.

PLN
It wasn’t until I got my first smart phone that I began to become part of a PLN (or personal learning network). This opened up so many doors to me through the eltchat, eltpics, Facebook groups, Twitter and so on. I can’t imagine today what I did before this and wish I had started doing this much earlier. 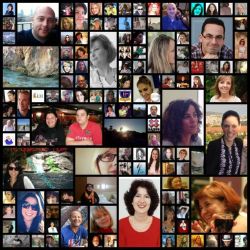 Blogging
I also came to blogging rather late, having started  in 2014. It is difficult to find the time and then it takes me awhile to find the appropriate photos to illustrate my points.  But I do wish I had taken the plunge and done it earlier. On the other hand, it is never too late to begin a new phase and I am glad I went ahead and tried out this wonderful way to be reflective.

Learning a new language
Living in Austria meant having to learn German but I don’t remember much about how I went about it. There are some aspects which have stayed with me but I didn’t learn it very systematically. I went to some classes but as we only read from a book and did gap fills it wasn’t really a learning process for me. I always wished that I had written out the three types of nouns in red for feminine, blue for masculine and green for neuter to help me remember. I am now learning Hebrew which has been a fascinating experience. Not only it is challenging to deal with a different script, but it is a language which is very different from English. I am happy to have the chance to both observe myself in learning as well as how my teacher works with me. I wish I had started earlier to learn a new language as I think this type of self-reflection is one of the most valuable things a teacher can do.

7 thoughts on “What advice would I give my former self?”